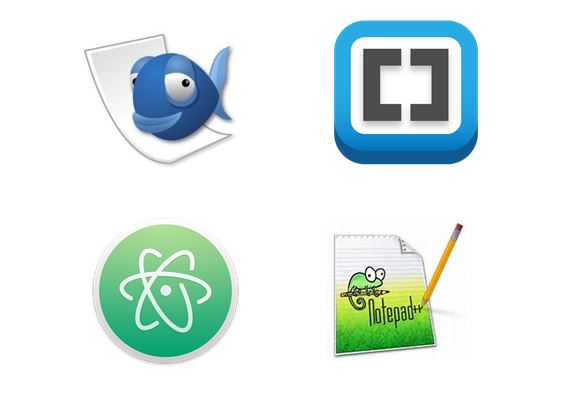 With the advent of Dreamweaver, Coda and Textmate most of us have forgotten the beauty that simplicity entails. These coders are heavier compared to their free and open source counterparts. Although an open source tool does not always have to be the best suited option, they are indeed sometimes capable of editing HTML, CSS, PHP and JavaScript at the same time making them extremely favorable among both amateur as well as expert coders.

So here we are, trying to compile a list of the 5 best available coders in 2016 which make work a lot easier as website developers. However it is to be noted that these are not ranked in order of their performance, they are indispensible and unique in their own ways.

This is from Github and is a new addition to the text editor world. Atom is a smooth, easy and smart code editor which has been winning hearts of all coder all around the world. It comes with no less than 50 open sourced package that allows users to create a software which is required for the task at hand. There are a number of features which determine the unique functionality of Atom, these include:

This free open source software can be supported on the latest versions of Windows, LINUX and MAC without any hiccups.

This has nothing to do with the windows Notepad which has next to no extra support for code editing. This is however an open source editor which bears a GPL license and has been released in multiple languages on a Windows platform. It is composed in C++ and uses STL plus Win32 for achieving a higher exec speed. This takes up next to no space on your machine and we simply love the flawless execution of code edits conducted by this evolved Notepad.
There are other features as well which have made us fall head over heels for the Notepad++ and these include-

It is rumored that jEdit is meant for the mature coders who know what they are doing. This open sourced program is supported by Windows, MAC OSx, LINUX, BSD, VMS and UNIX. This is written in java, making it one of the simplest and most flexible software tools which can be used to edit codes. jEdit has come to the web developers as a boon since it supports hundreds of add-ons, plugins and macros.
Here are a few features which made us a fan of this awesome free tool-

Just like its name, it is classy, simple and fuss-free when it comes to fast, flawless code editing. This is a feature rich editing tool which can be supported on Windows, MAC, FreeBSD, Solaris, OpenBDS and LINUX. The easy customization options bring for a luxurious user experience. Bluefish is well suited for both beginners and experts who want to create infallible codes for their next task.
Among all the features there were a few which caught our attention. Here is a comprehensive list of the features we found undeniably charming-

This is another open-source editor which is here to take your breath away. this is a must-have for all coders since it comes with quick edit, quick docs, LESS support and live preview options. This immaculate software has been released with a MIT license and was created by Adobe Systems for Windows, Mac and LINUX. A few of its salient features include-