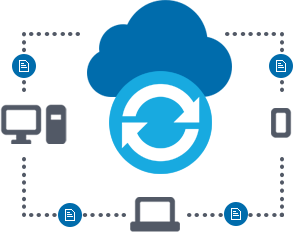 Users’ desire to access their content from anywhere  and the Proliferation of smart phones, tablets and game boxes like Xbox, PS3 in modern homes  and has created a  new market category of Personal Cloud solutions. Various research reports from leading research firms predict that the next decade will be an era of Personal Clouds and forecast the active accounts associated with personal cloud storage services will exceed 1 billion at the end of 2013.

When it comes to Personal Clouds, There are mainly 2 schools of thought

We (Tonido) are one of the early proponent of self hosted Personal Cloud concept. Now we can confidently say our Personal Cloud server,  mobile apps, sync and drive clients can give serious competition to popular public cloud compatriots in terms of functionality, UX, Performance and value. You don’t have to take our word for it.  Do your own research.  Check our mobile apps rating in the respective app stores, Read independent media reviews or check out user reviews of Tonido in popular news forums or just try the Tonido software by downloading from here.

But when you compete with multi-billion dollar behemoths like Google or Dropbox for a market share , it is imperative to change the narrative to objectivity and bring quantitative numbers to the table.If we are going to compete in terms of perception, it is a lost case and we don’t have the resources to pull it off.

So we did a comparison study between Tonido Sync vs. Dropbox’ s  two way file synchronization performance within LAN.  When the Tonido server and sync client is on the same LAN network,  our Smart LAN switch technology enables direct file, media sync  instead of going through our relay servers. In similar fashion, Dropbox’s LAN Sync  enables faster sync if two clients are on the same LAN. The benchmark results based on our tests will prove the merits of  Tonido Personal Cloud in an objective fashion. Based on our user metrics over the years, we estimate 70-80% of access happens within home LAN and the remaining 30% of access happens over WAN.  So it is very important to provide a superior experience when the access or sync happens within the home LAN and Tonido provides that superior experience.

Both computers under test are situated in the same LAN, connected to the same router and ran the latest versions of Dropbox and Tonido software. 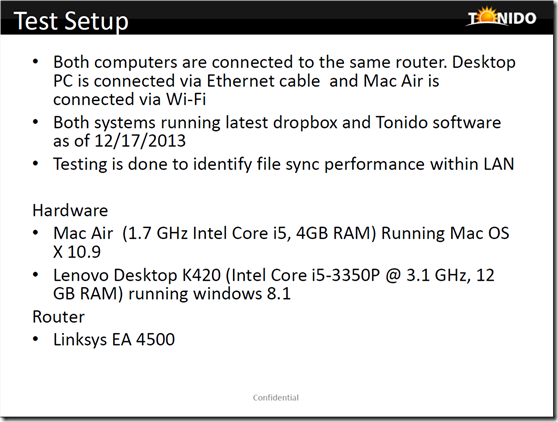 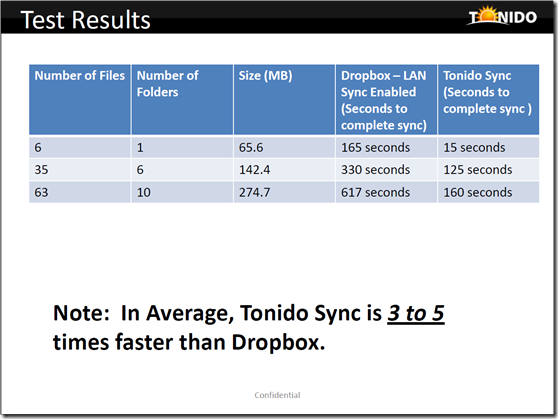 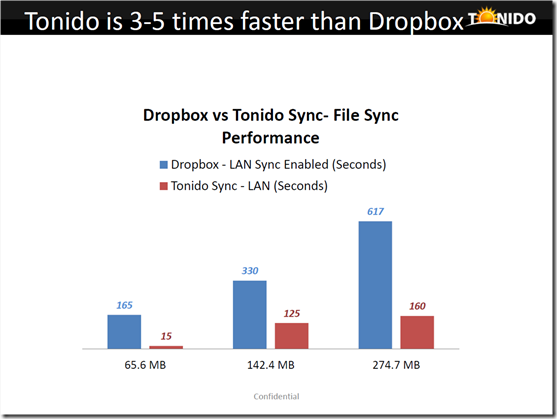 Based on our findings, In Average, Tonido Sync is 3 to 5 times faster than Dropbox in the same LAN. Let us know your experience in the comments.

If you are looking for a self-hosted alternative for Dropbox for Business that offers features similar to Dropbox but completely resides behind your corporate firewall, please try FileCloud.