FileCloud can be self-hosted either on premise or on a public IaaS cloud service such as AWS, and Azure. FileCloud customers has implemented both the options and they are equally happy. In the following calculations, if you are self hosting, we assume you buy a dedicated server and storage with backup.

The following chart compares cost of ownership per user that includes server costs, storage, bandwidth and licensing costs for running either FileCloud or Dropbox.   If FileCloud is hosted an on-premises server,  for an installation of 25 users, FileCloud would cost $46 per user/year while Dropbox cost $132/user/year. The cost increases to $83 if FileCloud were to be hosted in cloud via Amazon AWS. In either case, FileCloud is much cheaper than Dropbox. The cost saving gets significantly larger as we scale. For an installation of 500 users, FileCloud would cost ($27/user/year) one fourth that of Dropbox ($113/user/year). 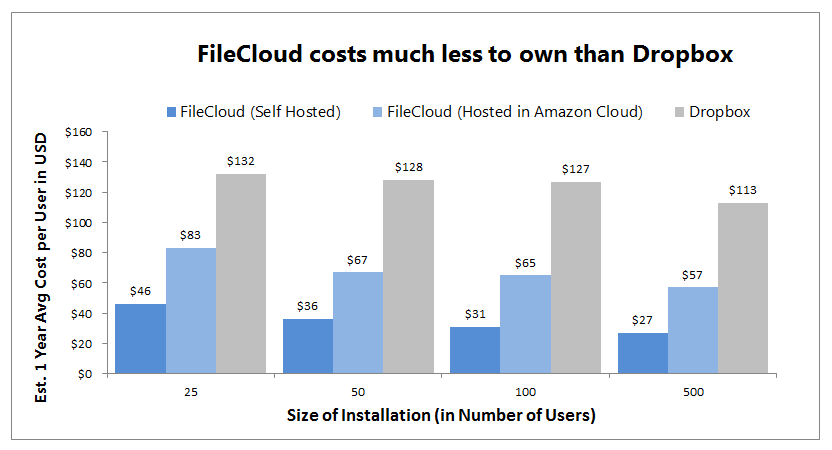 For an installation of 500 users, an organization could save over ~$40000/year by choosing FileCloud over Dropbox

In the following calculations, if users are self hosting, we assume they buy dedicated servers. In some cases, our customers have used existing servers to host FileCloud . In such cases, the cost of ownership will be even lower. In the case of fileCloud hosted in cloud, we have assumed you use Amazon AWS. There are many good hosting providers who could be materially cheaper than AWS and could help bring down the cost of ownership further. These calculations are based on static assumption that each user requires 25GB of storage and uses bandwidth at 2GB/month. In reality, you could save more by increasing the storage as needed. Alternatively, in case of Dropbox, you pay one flat price and it is the same price even for a light user who would use less storage and bandwidth. 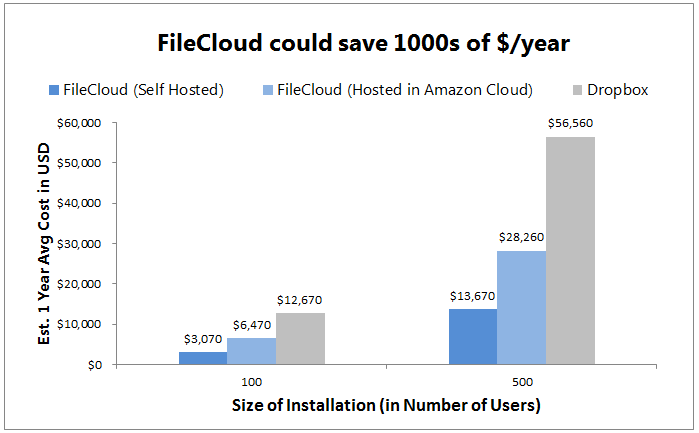 Total cost of ownership per year (FileCloud vs. Dropbox)