By submitting the above details, you agree that we can store and process your information as covered by FileCloud Privacy. If you want to delete your information, email us at support@filecloud.com.
NULL
This site uses cookies. By continuing to browse the site, you are agreeing to our use of cookies.

Replace FTP with a modern solution that users will love – FileCloud 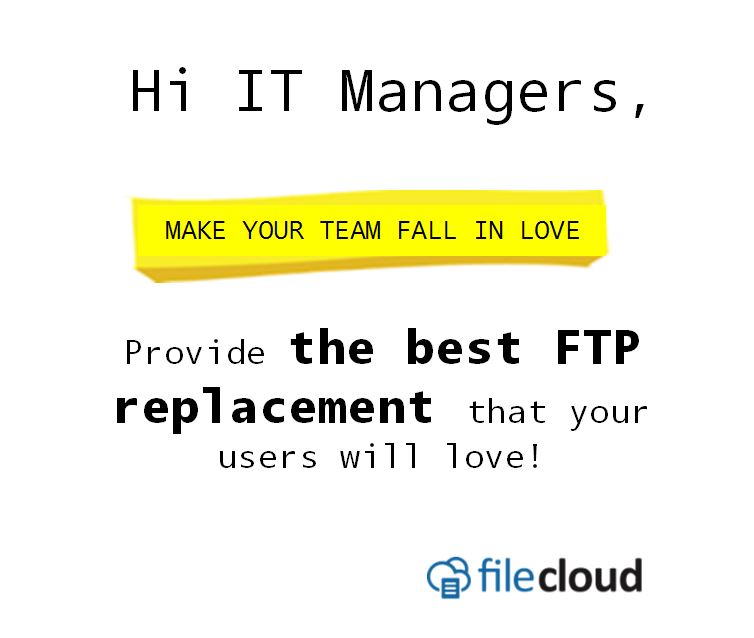 While working on publishing version 4 standards of the Transmission Control Protocol and Internet Protocol (TCP/IP) in the late 1970s and early 1980s, developers were able to run a series of experimental development work which later on led to the creation of modern TCP/IP.

Through this ground breaking innovation, the developers were able to further their work and divide methods of network use into two categories. The first category was the direct network use which allowed users to access remote hosts and use them as though they were local. One such application was Telnet.

The second method of network use was indirect use which allowed users to get resources from a remote host and use them on a local system then transfer them back to the remote host. One such application was FTP.

How Developers Have Tried To Improve FTP

Initially created to simply transfer or share files within a network, FTP developers found it necessary to improve their innovation. This is why the initial FTP standard, RFC 114 was improved from just a definition of basic commands and how devices could communicate using the protocol. A series of upgrades through to RFC 172,265 and 354, ultimately led to a more secure FTP that required users to use usernames and passwords before they could share or retrieve files.

As much as developers tried to secure the file sharing solution by adding a secure extension, FTPS, FTP users still come across a number of security and efficiency issues.

FTP usually has a 2 GB limit to the file size you can send or share, making it inefficient for businesses that usually deal with large file sizes. Worse still, in the event you send any file and it fails to deliver, FTP does not notify you of the failure unless you manually check for it. Additionally, you cannot run simultaneous transfers to multiple recipients, making this a time-inefficient file sharing solution.

FTP users are faced with security issues ranging from brute force attacks, spoof attacks to network sniffing. To put in perceptive the gravity of these vulnerabilities, a report by Sucuri shows that as much as brute force attacks have been existent for more than 15 years, they hit an all-time high in September 2015 when they discovered 35 million attacks per day, a significant increase from 5 million per day in January 2015. Worse still, the cost of data breach is estimated to be $3.79 million USD, according to IBM and Ponemon Institute in their report, “2015 Cost of Data Breach Study: Global Analysis”

How FileCloud can replace FTP

FileCloud, an on-premises Enterprise File Sharing and Sync (EFSS) solution has proven to work better than FTP in a number of areas and ways as discussed below:

From the start, FileCloud was ideal for businesses that valued security and data ownership. Data ownership is enhanced by the fact that the software empowers corporate IT departments and MSPs to create their own, secure file sharing and sync platform.

FTP offers no traceability at all while FileCloud developers have ensured that any file activity or action, however small, can be traced. For example, in FileCloud 8.0, users can use the activity stream feature to review any action taken on files and folders saved on FileCloud. You can monitor actions such as document uploads, downloads, updates and sharing within your team, for example.

File editing has never been easier before. FileCloud, through the file comments feature, helps enhance team communication and collaboration.  For example, any comments added to a file sent for review will be displayed, showing who commented, what they said and when they did it. Additionally, the quick document feature allows you to quickly incorporate the comments and edit the document accordingly then save the new version, without downloading or uploading anything on the FileCloud server.

FileCloud offers better security than FTP, no wonder it is trusted by 2000 global enterprises across industries, in 90 countries.

The security features include:

If you are looking for a secure FTP replacement, click here to learn more about FileCloud – a modern alternative to FTP. Try FileCloud today and begin enjoying features that FTP does not offer you.